Brilliant Recent Posts
Blackwater: Using the Iraqis for target practice
John Edwards Rocks MTV/MySpace, Thursday at Noon E...
Another Downing Street Memo...will anyone care thi...
Bush, think for once in your life
Liveblogging the Democratic Debate
What the fuck is wrong with these people?
Another sign that Hillary Clinton has as little re...
Democrats, this is how it's done
Dear Atrios,
Isn't it funny how the advocates of globalization ... 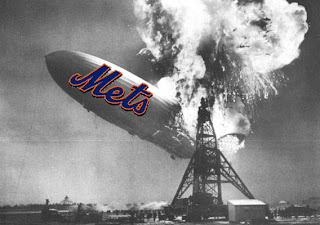 Oh the humanity!
The same co-worker who the other day said that people like me are responsible for Mahmoud Ahmadinejad being allowed to speak also berates me for not being a "true fan", because when my baseball team starts making a loud sucking sound, I just turn the page on the season and settle down to an autumn of reading books and catching Oscar® bait movies.

In these days of naming rights for ballparks being sold to the highest bidder and the new parks being built not only smaller but with fewer seats for the hoi polloi, what does "being a fan" mean? Am I supposed to spend my limited free time watching while José Reyes sulks and pouts his team into an October of playing golf?

You'll notice that I have (hopefully temporarily) removed the Mets section from the left sidebar. It isn't that I have anything against Metsgrrl (who has the most entertaining of the Mets blogs and from whom I filched the accompanying photo). It's just that it's become so painful to watch as Jimmy Rollins' preseason prediction that the Phillies will be the team to beat starts to look like it's coming true, and I have enough aggravation in my life, thank you very much. I mean, who needs to spend time watching the Mets bullpen blow lead after lead to the last-place Washington Nationals during the last week of the season? That way madness lies, and you end up in the Mets equivalent of the Jerome Zone.

It's days like this when I really miss having Steve Gilliard around. He'd understand.