Brilliant Recent Posts
Quote of the Day
These people are absolutely fucking batshit crazy
Hair
A wolf in sheep's clothing
They might as well just shoot 'em -- it'd be quicker
Non-political blog of the month
Need some laughs?
Must read IMHO
Mencken
Dubya 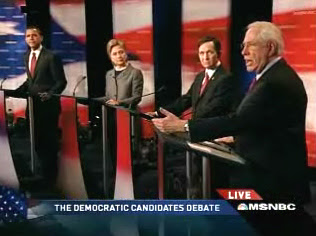 "This is American imperialism. It hasn't worked and will never work." - Mike Gravel, after the Iowa Democratic debate, 8/19/07

"George, I've been standing here for the last 45 minutes praying to God you were going to call on me." - Dennis Kucinich, Democratic debate, 8/19/07

This series concludes with a look at the two guys who almost occupy stage left and right during Democratic presidential debates and are close enough to shake hands with the janitor: Mike Gravel and Dennis Kucinich.

There are politicians who think within the box. A small fraction of that think outside the box. Then there’s one guy who comes along maybe once every generation who are so far outside the box that you can see them recalibrating the box folder so a more efficient box can be made to think outside of.

Such is Mike Gravel, former Alaskan senator. Gravel at 77 is far too old to be seriously considered for even one term (Reagan was about Gravel’s age after serving two terms). Yet Gravel, as with Kucinich, raises valid points, shows us where the system is failing and serves as an ancient mariner, a Greek chorus to the eight mainstream candidates who represent to thinking progressives “four more years.”

Gravel carries around his neck not only the albatross of old age but that of the air of irrelevance. Losing his Senate seat to Frank Murkowski in 1980, Gravel dropped out of politics at any level until 1989 and didn’t achieve anything remotely resembling national prominence again until this year when his cranky but spot-on “Howard Beale” moments during the Democratic presidential debates began to attract a small but slowly growing following on the Internet. But the young’uns on Facebook who place him third on their list of favorite Democratic candidates may forget Gravel’s history. The irrelevance is only an illusion happily fostered by the war hawks in their established pecking order (especially Clinton and Edwards).

I’ve heard it mentioned only once that Gravel was instrumental in releasing the Pentagon Papers. The 4100 pages that he’d had entered in the Congressional Record are still, to this day, considered the most complete version extant. Gravel is also a big reason why we don’t have a draft. He’d heroically filibustered against the renewal of the draft and, after stonewalling the Nixon administration (which must have hated him by now) for five months, the draft had become a thing of the past.

The self-effacing and perennially broke Gravel is the Rodney Dangerfield of the ten and the biggest candidates are probably silently praying that the nursing home orderlies will come to take him away. But what’s not to like about a guy who doesn’t take PAC money soft or otherwise, or lobbyist payola, castigates Clinton for his “Don’t Ask, Don’t Tell” policy, thinks that homosexuality ought to be encouraged in the military, wants to do away with the IRS, encourages legislation to be written by citizens and took public transportation to his own candidacy announcement?

And Gravel raises the most relevant points- actual lobbyist and campaign finance reform that’s necessary and not just the tepid, lip service legislation that we see every election cycle. Getting us out of Iraq and immediately (Mike’s best Howard Beale moment is on the final fifth of this mp3 file).

And he’s perfectly right when he says that no one knows what will happen if we pull out now. And when he says that, he makes the rest of the field (excepting Kucinich. And, yes, I will get to him in a minute. But I’m really grooving this Gravel guy right now) look like a bunch of waffling, self-calibrating prognosticators. But if one wants to risk using Vietnam, fundamentally a different war than Iraq, as a template, then one can point to the fact that the Viet Cong or Pol Pot didn’t follow us back to Disney World to blow up Space Mountain.

Mike’s my type of politician: Blunt to the point of rudeness, ruthlessly honest and independent and one who never promises, only proposes.

You want to know what my ideal summer job would be? The official but unpaid blogger for the Mike Gravel for President campaign. Mike’s blunt, plainspoken style perfectly compliments my own style of polemics and hare-brained, out-of-the-box, immodest proposals. I predict Mike’s ideas both past and present, at once revolutionary, visionary and out of the mainstream yet as commonsensical and necessary as looking both ways before crossing a street, will be mainstream in just under a century and historical scholars may even be rhetorically asking, “Why in God’s name didn’t they elect George McGovern and Mike Gravel?”

Or maybe I’m just partial to him because he’s from Massachusetts. But don’t bet on it.

And while it would be nice if one Democratic candidate would have the balls to come out and say that US involvement is only inflaming Iraq, the likeliest person to make such an pronouncement would be Gravel or the next guy.

The most remarkable thing about Dennis Kucinich’s campaign is the fact that he’s not using the biggest gun in his campaign arsenal: HR 333.

Never once has anyone heard Kucinich mention his articles of impeachment against Cheney on the campaign trail (although a month before HR 333, back in March, Kucinich did do a horrible campaign ad asking for a dialogue to be established regarding impeachment and he did renew his call for impeachment in the abstract at YKos). He prefers to take the high road and keep his biggest gun holstered. Such a class act and restraint is admirable but perhaps Congressman Kucinich hasn’t fully delved the possibility that drawing that big .333 caliber gun would further distinguish him from a mostly homogenous field.

Because doing so would be to publicly admit that we were lied and even shamed into Iraq, an abundantly clear fact the other candidates (except, predictably, Gravel) are too timorous and squeamish to point out.

That’s not to say that Kucinich plays with over-padded boxing gloves. Kucinich has not been shy about saying that “oil revenue sharing” is theft of Iraq’s oil, plain and simple. He’s also the only one in the field who wants to bring back the Fairness Doctrine and says so on Faux News. His single-payer health care plan is also the one that seems the most workable.

Listening to both Gravel and Kucinich, one is left with the uneasy feeling that all the other candidates are more interested in being the one to salvage Iraq (especially the ones who'd voted for it without reading the NIE) than in ending it for decency's sake. Only Kucinich and Gravel seem committed to ending the war, while the other candidates are nodding in agreement like bobbleheads when they say that we can’t exit quite now, that it would take a year or more (only Bill Richardson offered a timeline of as little as eight months). In other words, withdrawal with honor and grace.

Let’s look at Iraq in neighborhood terms: A drunken lout invades a family’s home on false pretenses because he hears that the husband threatened his family. He kills off a few family members, raids their fridge, holds a yard sale selling off their possessions and watches impotently as the other family members kill each other off as a result of the home invasion.

Would a graceful exit still be possible?

The candidates representing the establishment would have you think so just as George W. Bush is doing, while many of them, especially Hillary, are warning us that we’ll have to deal with Iran at some point. Like I said, “Hillary/Bush: Four More Years.”

I’m not too thrilled with the idea of a Gore draft and I’ll tell you again why: The last thing we need is a Democratic version of Fred Thompson, someone who claims to have no ambitions to run yet technically leaves the door open. I also cannot trust someone who trusts the GOP and warns the Senate Democratic leadership not to make waves about the Supreme Court’s astoundingly conflicted interest installment of George W. Bush. Likewise, I cannot understand why Gore would tell the Senate Democrats to not sponsor a petition to investigate the obvious voter fraud of 2000 that knocked innocent African Americans off the voter rolls.

Although my two choices, the men profiled in this segment, haven’t a prayer in Hell of getting anywhere close to the nomination, you want to know which guy who makes me swoon in the moonlight, the one who makes me want to wear sackcloth and ashes because he’s more interested in being a Senator than President?

His public record speaks for itself: The only Senator to publicly call for censuring Bush. The only guy who voted against the USA Patriot Act. Whatever the issue, Feingold always seems to find himself on the right side of it. In the absence of Paul Wellstone, Feingold is the best Senator we have, hands down, and he’d be one of our finest presidents in modern times.
0 comments