Brilliant Recent Posts
A post I wish I'd written
Hey! I'm not blocked!
Around the blogroll and elsewhere
It's Sartre's world, and now we all live in it
Not the only idiot in the family
Just so much cannon fodder, then just so much carrion
Tuesday morning quarterbacking the debate
Why am I not surprised?
It always comes down to sex with this bunch
Psychiatric Help - 5 ¢ 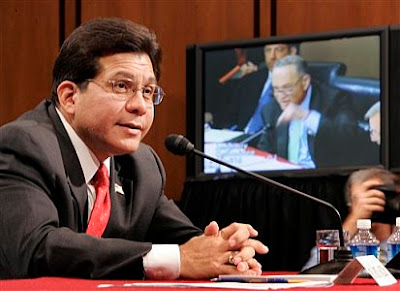 Why is this man smirking?
(AP Photo/Susan Walsh)

That's an easy one to answer -- it's because he knows that no one can touch him. He knows that his presdent, the self appointed First Dictator of the United States, will protect him to the ends of the earth. After all, isn't that how organized crime works? Solozzo didn't dare touch Tom Hagen, and Congress won't dare impeach Alberto Gonzales, despite the latter's obvious perjury yesterday:

ThinkProgress has the document showing clearly that Gonzales perjured himself about the March 2004 White House intelligence briefing.

The only way that Gonzales hasn't committed perjury is if there is another, even more secret surveillance program to which NO ONE outside the Administration was privy. Would he care to elaborate on that one to avoid a perjury charge? I think not, especially when there is some question as to exactly whom is going to try him.