Brilliant Recent Posts
Hey! I'm not blocked!
Around the blogroll and elsewhere
It's Sartre's world, and now we all live in it
Not the only idiot in the family
Just so much cannon fodder, then just so much carrion
Tuesday morning quarterbacking the debate
Why am I not surprised?
It always comes down to sex with this bunch
Psychiatric Help - 5 ¢
A different kind of surge 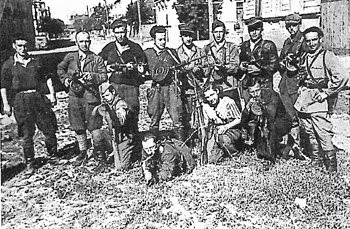 During World War II, the majority of European Jews had no idea that the Nazis were conducting a meticulous disinformation campaign to convince them that they were going to work camps instead of being exterminated. Yet more than 30,000 Jews escaped from Nazi ghettos and camps to form or join organized resistance groups.

These 30,000 Jews joined hundreds of thousands of non-Jewish partisans who fought the Nazis, but they had to worry about local antisemites. Often they formed all-Jewish groups to protect themselves from their old neighbors.

Resistance took on different forms. Physical resistance by the partisans was something that hurt the Nazis. Spiritual resistance may not have affected the Nazis directly, but it was important to the Jews, since the Nazis wanted to take away their dignity and self-respect.

In defiance of the laws, the Jews held prayer services, or taught children to read Hebrew; those who performed in theater groups or in concerts, who painted pictures and wrote poems, were part of the resistance, though they had no guns.

There were smugglers who sent children to safety and couriers who carried messages between the ghettos, as well as forgers who created documents for use in the outside world. Jews in the work camps sabotaged guns and other products they were making for the Germans.

Partisans with ammunition blew up thousands of Nazi supply trains, making it harder for the Germans to fight the war. In Lithuania, Jewish partisans were responsible for significant damage to Nazi trains.. Partisans also destroyed numerous Nazi power plants and factories, and focused their attention on other military and strategic targets, not on civilians.

I'm so ashamed. Ashamed that with four grandparents who escaped the pogroms in Russia and Poland, with one set of great-grandparents who actually WENT BACK just in time for Hitler -- I had never even heard of Jewish Partisans until tonight, when I read this post by Jane Hamsher:

One of the most pernicious and popular soundbites being exploited these days is the denigration of “partisanship.” When it comes out of the mouths of Republicans who perfected the art of soulless political grandstanding in the 90s, it’s hard enough to take. It’s even tougher to stomach when it comes from George Bush with his thorough devotion to Karl Rove (who needs no better reason to sabotage national security and flagrantly violate the law than the fact that someone is a Democrat). Then there are the useful idiots like Sam Waterston and the Unity ‘08 nuts who really just don’t know what they’re talking about.

But people like Joe Lieberman (and his protege Barack Obama) who consistently indulge this frame ought to know that sometimes the right thing to do is to acknowledge that the other side cannot be bargained with, that no negotiation is possible, that what you’re up against is just wrong and it’s incumbent upon people of conscience to draw a line in the sand and say “enough.” That too is partisanship, and they need to stop decrying it just because it focus groups well with people sick of the GOP and their bully tactics. Partisanship in fact has a glorious history.

Most of us, when we think of the Holocaust, we think of passive Jews, marching obediently into the gas chambers, willing themselves to believe that they were just going to be deloused. Funny how we never hear about the ones who fought back:

With a president who has now signed a Presidential Directive that effectively criminalizes dissent, it's important that we take back the word "partisan" from the people who would have us march obediently into tyranny and call it a virtue, on behalf and in memory of those who risked everything to fight back.