Brilliant Recent Posts
So much for enlightened Gen-Xers and sellout boomers
Around the blogroll and elsewhere
Rudy Giuliani: Making the world safe for Oxyconti...
If Karl Rove did nothing wrong, why are they hidin...
Didn't this used to be called "entrapment"?
Cat blogging
The Daily Knut
Now that their careers are at stake, Republicans t...
If melamine is so safe for human consumption, why ...
The legacy of the "sanctity of human life" president


Render Unto Caesar
Posted by Jill | 7:46 AM
I would not find it nearly so disheartening to hear Democratic candidates for the presidency talking about "respecting people of faith" were there not so many such "people of faith" trying to ram their religious beliefs down the throats of the rest of us via the legislative and judicial processes.

We've already seen five Roman Catholic Supreme Court justices decide that even a doomed fetus' short life is more important than that of its mother in Gonzales vs. Carhart. And while Dick Cheney's ambitions in the Middle East may be to own it all for Halliburton, George W. Bush's seem more as if he's trying to fulfill his self-styled role as God's Anointed Architect of the Rapture. The other day we saw the Pope use the "E" word -- excommunication -- to describe Catholic politicians in Mexico who legalized abortion there. Of course in keeping with the current trend of the sanctimonious refusing to actually deal with the consequences of their edict, he said that they have "excommunicated themselves." But the message was clear -- support abortion and risk being kicked out of the church.

It's mind-boggling that forty-seven years after we thought the election of John F. Kennedy had put the "religion before policy" argument to rest, we have to deal with it again. But this is largely because of the Republican adoption of the most extreme elements of those so-called "people of faith" as the party's base. And that base is tired of being good soldiers, of having their concerns be the focus of lip service followed by what they see as insufficient action. When Jerry Falwell and Pat Robertson found colleges and law schools and think tanks, and their graduates are guaranteed jobs in Republican-controlled government, I don't care if you're mandating believing that a Jewish carpenter who got nailed to a cross 2000 years ago was the literal son of some great white Alpha Male in the sky -- you are establishing religion in direct conflict with Amendment I of the Bill of Rights.

Now Mitt Romney, in what I wish I could be sure was a ridiculous pandering to the Christofascist Zombie Brigade, is citing Scripture to defend his stand against gay marriage:

The former Massachusetts governor, who in his 1994 Senate bid pledged to be a more effective champion for gay causes than his Democratic rival, discussed gay marriage in an interview set to air Sunday on CBS' "60 Minutes."

"This isn't just some temporary convenience here on Earth, but we're people that are designed to live together as male and female and we're gonna have families," he tells interviewer Mike Wallace, according to an excerpt CBS released Friday. "And that, there's a great line in the Bible that children are an inheritance of the Lord and happy is he who has or hath his quiver full of them."

You have to admire how deftly he managed to get opposition to gay marriage and an embrace of the "quiverfull" movement in the same paragraph. You know what "quiverfull" is, right? It's a movement among these lunatics to pump your wife full of sperm every minute that she isn't pregnant and produce as many people as possible. Under the Jeebolunatic doctrine now endorsed by Mitt Romney, the ideal family looks like this: 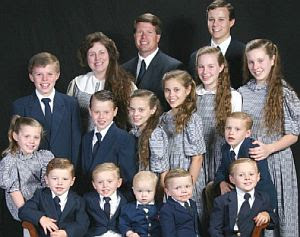 That's Jim Bob and Michelle Duggar and sixteen of their children. Baby #17 is due in July. Michelle Duggar has been pregnant seventeen times in nineteen years. Now if that is her choice and they can afford it, more power to them. Far be it for me to sit in judgment. But there seems something cruel about force-weaning a baby at only a few months of age, which is what you'd have to do in order to become pregnant again so quickly. It also seems cruel to enlist the older memebers of such an army to care for the younger, as happens in such large families. I used to work with someone who was the oldest of thirteen, and she would tell us about making dinner for her younger siblings while in her early teens.

But still, one of the arguments about choice is that the choice to, as the parody poster of this family says, use your vagina as a clown car is to be defended as much as the choice to remain childfree. That said, when you look at how the next judicial bastion of mandated fundie life is going to be Griswold v. Connecticut, a presidential candidate, or any candidate for federal office for that matter, who "allows his faith to inform his decision-making" over his obligation to the United States Constitution, has as far as I'm concerned disqualified himself from holding office.