Brilliant Recent Posts
Katie Couric is going to be SOOOOO disappointed
Now this just might be a worthy effort at combatti...
Around the blogroll and elsewhere
Someone page Bill Donohue -- there's a war on East...
Blog 'n' Roll
Blog Comment of the Day
Poking the Atrios Bear
Is isn't just pet food anymore
Great Moments in Progressive Blogging II
Debunking the Bible 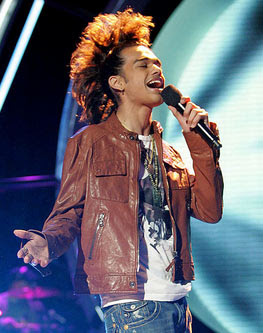 Vote for this dork. It's important.

I hate to go against my good friend Jon Swift, especially when he has just delivered some of the best piping hot, delicious, extra-crispy snark it has ever been my pleasure to consume. But I have to differ with him on one thing, and that is on the subject of Sanjaya Malakar.

You have to realize that I don't watch American Idol. Never have, never will. I don't much care for pop singers, so why would I listen to a bunch of mediocre ones? Oh, I'm happy that Jennifer Hudson won an Academy Award, but that's as much because she's a woman of some size as it is because Simon Cowell dissed her. But seriously, everything I know about American Idol I've learned from either ModFab or the tag team of Keith Olbermann and Maria Milito.

But I'm not just spouting liberal claptrap here. I really want this kid to win. Why? Because it's clear that he SO gets it. He knows he can't sing. But while he's bad, he's not William Hung bad. There's nothing to feel superior to in Sanjaya Malakar, because he is playing this show like a fine violin. Here is this scrawny, 17-year-old kid with a smile as big as all outdoors. He's got the whole 1970's Shawn Cassidy/Andy Gibb thing down pat -- the moves, the sly smiles at the girls, and an even bigger smile for the rest of the audience that says "Fuck you -- I suck, I know it, and what are you going to do about it?" He's all style and no substance. He has an amazing way of distracting people from what's really important even as he gets more outrageous all the time. For whatever reason, he's been able to get millions of people to forget about the damage he's causing the particular ship he's steering at the moment and vote for him. In short, Sanjaya is the perfect American Idol winner for the waning days of the George W. Bush administration.

I'm not alone in rooting for Sanjaya either. Alex Blagg at HuffPo also understands the context of the Sanjaya phenomenon. If George W. Bush is the perfect candidate for the Christofascist Zombie Brigade because, as Marc Maron points out, he's the guy who can bring about the end of the world -- and they're ready to go; then Sanjaya Malakar is the perfect winner for those of us who want to see American Idol, with its cookie-cutter screeching pop singers, dead and buried, with a wreath of garlic around its neck and a stake through its heart.

And now I'm done blogging for the day, because at this point, ModFab is probably standing right behind Atrios, waiting to shoot me in the face.