Brilliant Recent Posts
Franken is running
I am Spartacus
Jesus for President
Either he's a moron, or Alzheimer's is setting in
Here's where they're getting the soldiers for the ...
Thank you, Al Franken
Iran War Justification Part II
Quote of the Day
Ah, fuckity-fuck-fuck-fuck
Bullies 1, Sanity 0 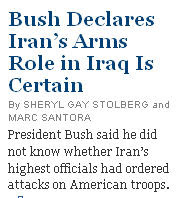 Does anyone else find something odd about this headline?

President Bush said Wednesday that he was certain that factions within the Iranian government had supplied Shiite militants in Iraq with deadly roadside bombs that had killed American troops. But he said he did not know whether Iran’s highest officials had directed the attacks.

Factions within our government have profited from the Iraq war and blew the cover of an NOC CIA agent in an attempt to cover up their lies that got us into that war. What of it?

“I can say with certainty that the Quds Force, a part of the Iranian government, has provided these sophisticated I.E.D.’s that have harmed our troops,” Mr. Bush said, using the abbreviation for improvised explosive device. “And I’d like to repeat, I do not know whether or not the Quds Force was ordered from the top echelons of the government. But my point is, what’s worse, them ordering it and it happening, or them not ordering it and its happening?”

There's your One Percent Doctrine in action, folks: If there's even the slightest chance, even if it's a chance that may exist only in the delusional heads of the two lunatics running this country, it's damn the torpedoes and full speed ahead.

The pictures released last week of Iraqi high-tech explosives surprised me. These special 'superbombs' that have caused so many US casualties -- they look like they had been assembled in someone's garage...as has been observed here, anyone can make crude and simple EFP munitions in a basic workshop. All you need is a lump of plastic explosive and a piece of copper. Shape the copper into a saucer, put the explosive under it, and you're there. Obviously this will be a lot less efficient, accurate and reliable than something like SLAM (optimal design of the the metal 'lens' is an art requiring a lot of computer power), but you can compensate by making it ten times bigger if you need to.

Maybe the insurgents should be given some credit for being able to build their own gear, or maybe there's more intelligence we don't know. But if EFP mines were being supplied by an outside source, you might expect to see somethng a lot slicker.

Iran does actually professionally manufacture a shaped-charge EFP device. Blogger is playing up right now so I can't get the picture to upload but have a look. It looks nothing like those photos from Sunday's briefing.

Update Sean Paul at the Agonist has some great commenters, and they are busy tracking down some possibilities. It can easily get confusing looking at the various weaponry types and options and trying to figure out which is which. Of course, that's what the Bush administration is relying upon.

One of Sean paul's readers points to this Asia Times article:

An article in Jane's Intelligence Review last month by Michael Knights, chief of analysis for the Olive Group, a private security-consulting firm, reports that the British discovered that there was indeed an organization in Basra engaged in arranging for the purchase and delivery of imported EFPs and that it was composed entirely of police officials, including members of the Police Intelligence Unit, the Internal Affairs Directorate and the Major Crimes Unit. They found that members of the organization followed no specific Shi'ite faction, but included members from all the factions in Basra.

...The EFPs used against US and British troops in Iraq were the centerpiece of the briefing. But the anonymous US officials did not claim that the finished products have been manufactured in Iran. Instead they referred to machining of EFP "components" - referring to the concave metal lids on the devices - as being done in Iran.

If you're interested in separating the wheat from the chaff on this story, especially if you, like me, are remembering Colin Powell sitting in front of the UN with his photographs and test tubes, spouting utter horseshit that he knew damn well was utter horseshit, I really urge you to bookmark NewsHog -- because unlike the mainstream media, who seem bound and determined to help the Bush Administration fabricate a cassus belli -- he and Sean-Paul at the Agonist are actually trying to get to the bottom of this.