Brilliant Recent Posts
Obama is looking better and better
OK, Hillary, you'e got yourself a deal
You know what REALLY sends "the wrong message to o...
Just STFU
And now, from the All Stupid All the Time Network
The Greening of Air America Radio
Why Americans don't know what to believe
Why health care in this country MUST be removed fr...
Why is there no outrage about this?
"Protect our troops" -- yeah, right.


Beauty pallor
Posted by Jill | 6:56 AM
This month's AARP magazine has a new and surprising ad from the Dove "Real Beauty" campaign. As leery as I am of a corporation in the business of selling cosmetics and creams talking up "real beauty", I have to give props to Dove (whose body washes I actually use) for putting its money where its corporate mouth is. The latest entry in the "Real Beauty" campaign is for the company's pro*age line of products. While there seems to be something inconsistent about "celebrating women of a certain age" to sell moisturizers, the Pro Age site does avoid "promising to restore the dewy glow of youth", instead describing the line as "products that reflect the unique needs of women in their later years. Formulated to nourish and condition, pro·age helps revive and renew skin and hair."

OK, fair enough. One thing I've found in this first winter since really noticing my age kicking in is that when you get north of 50, your skin dries out. That's just a fact of life. And the creams and lotions you buy aren't so much about restoring lost youth as to keep from scratching yourself raw and to leaving flakes in your wake because you don't slough off dead skin the way you used to. So the daily bathing ritual is no longer hop in the shower, wash, towel off and go. It's now a seemingly endless parade of body washes and scrubbies and pumice stones, followed by creams and lotions for every part of the body. Aside from the Dove body wash, I've had just as good luck with lotions from the Dollar Tree as I've had from more expensive products. But there's something refreshing about advertising for skin care products that simply allude to dealing with the realities of aging skin than promising results that we all know can't occur. 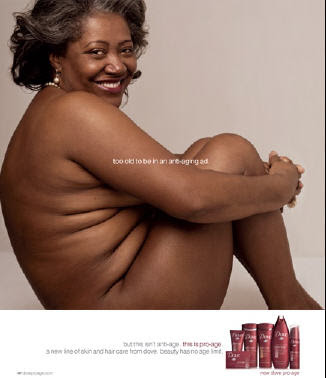 This is the ad on the back cover of AARP magazine. I love this ad. At first, the shock of seeing a woman who's not only not young, but is also quite zaftig, is jarring. But after a moment, you realize that this woman is gorgeous. She isn't young and she doesn't look like a fashion model, but she is gorgeous. There's a whole series of these ads, and amazingly enough, it isn't just the black women photographed like this. If they're airbrushed, they aren't airbrushed much. But what's interesting is how the only "woman of size" pictured is black -- and how scrawny and dried-up the other women look.

Which brings me to something else I realized yesterday. There is only one place in the world where women feel comfortable to be their true selves, and that is at the hairdresser. I have a terrific guy who does my hair. He's a gay man in his 50's, he and his partner have been life AND work partners for over 30 years (not an easy thing to do), and their shop hasn't been redecorated, or even updated, in over 30 years. It's one of those places where the median customer age is somewhere around 75. But he does amazing cuts and fabulous color that doesn't hurt your hair, and he doesn't cost an arm and a leg. And he's worth the 30 mile shlep. 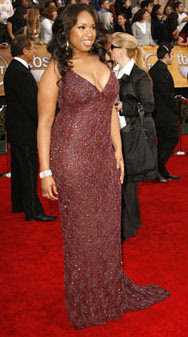 But when you're sitting there with brown goo on your head for 45 minutes, there's no point standing on ceremony. So that is where I read things like Us Weekly. When you read a magazine like this, you wonder how on earth it is that celebrities define what beauty is in this country, because these magazines contain photo after photo of people who look so mindbogglingly unattractive you wonder why anyone holds them up as a standard. Jutting collarbones, stick-thin arms, bony ankles, huge blue teeth, huge red lips, apple-cheeks that look like they're holding acorns. And then there was Jennifer Hudson, respendent in a form-fitting red beaded gown, looking every bit a size 12-14, and knocking the socks off everyone else in the magazine.

Add to this equation the now healthy-looking Tyra Banks, and does anyone else see a pattern here? Why is it that even though there were some Caucasian women brave enough to bare all for the Dove pro*age campaign, not one of them looks like she didn't step out of an Eileen Fisher ad?

This subject was covered in of all places, the Washington Post on Friday:

These disparate magazines are lauding the booty beautiful at a time when the body standard for models -- and actresses -- has come under scrutiny for being unrealistically and unhealthily thin. While designers in New York were unveiling their fall 2007 collections last week, the industry hosted a panel presentation on the subject of ever-shrinking models who have gone from a size 6 a decade ago to size 2/4 and occasionally 0.

The one thing that connects these three curvaceous women, other than their celebrity, is that they are women of color. On them, curves are acceptable.

While women such as actress Kate Winslet, who is white, have talked about not giving in to a Hollywood culture that demands they be super slim, it seems that only African American and Latina actresses really get away with extra pounds, or even just a round bottom. See: Jennifer Lopez, Queen Latifah, "Ugly Betty's" America Ferrera and "Grey's Anatomy's" Chandra Wilson and Sara Ramirez.

One could argue that these women, each one quite pretty, are not considered part of the mainstream -- their ethnicity is still a regularly used modifier in their professional lives. They stand just a little apart, so they are exempt from adhering to mainstream definitions of beauty. They set their own standards. But being judged by a different set of rules can be both liberating and vexing.

There may be a greater willingness to accept heft when it is brown or black because it is so much easier to find evidence of black women who are large and proud and take pleasure in their bodies. While so many women -- of all ethnicities -- fret about a modest waistline that protrudes slightly over a pair of low-slung jeans, creating the dreaded "muffin top," there is a group of self-assured women of color who have an entire loaf of bread rising up and over their waistband, and they don't care. Their pudge may not be healthy, but they project confidence and contentment.

There is also the stereotype of the large black woman as the diva-like sexpot: strong, aggressive and entitled. See: the comedian Mo'Nique. There is always the looming danger of taking that caricature into destructive and demoralizing territory -- black women as oversexed, or black women as impenetrable, or obesity as healthy. But that iconic image has established that big can be beautiful and desirable -- at least when it comes to women of color. Telling a black woman that she has "big legs" -- meaning shapely -- is a compliment, not something meant to send her into training for a marathon.

There's a certain National Geographic quality to all this. It's the same standard that says it's OK to show breasts on network television if they are on black women portraying African tribeswomen. I don't know if it's because Dove wasn't able to FIND any Caucasian women who aren't bone-thin who were willing to be photographed like this, or if they are perpetuating, however inadvertently, this "not quite human" attitude that seems to sit just barely (heh) under the surface of this racial double standard for nudity. But I'd be a lot more likely to stock up on their products if we did see even one Caucasian woman with a BMI of more than 20% who had the guts to appear in one of these ads.

And don't ask me to volunteer. That brave I'm not.

UPDATE: Here is the whole ad that you won't see on TV in the US, because it's perfectly OK to show Paris Hilton showing booty while fellating a Carl's Jr. burger, but God forbid a woman who is over 50 and hasn't had plastic surgery should dare show other than her face. This one's from Germany:

More on the Dove campaign from:

The Greatest Blog You'll (Probably) Never Read
Take a Peck
Back in Skinny Jeans
Kontrabida (and thanks for the YouTube!)
Fifty and Furthermore