Brilliant Recent Posts
Can we send Laura Ingraham and Ann Coulter to Iraq...
Remind me again why the Bush government should be ...
John Stewart Macheath
The day after
Congress Won't Outlaw Free Trips? No wonder
Congress Is Growing Balls?
Bushco Is Lying...What A Surprise
This Isn't Good News At All
A Good Post About America
Crank Yankers


They Finally Got The Right Guy?
Posted by SPIIDERWEB™ | 3:34 AM 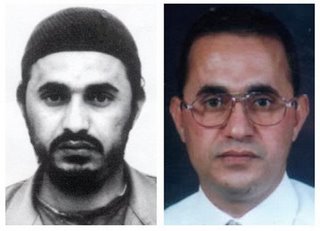 This just posted. Don't know if its true because I haven't seen any confirmation of the report.

Abu Musab al-Zarqawi, the al-Qaida-linked militant who led a bloody campaign of suicide bombings, kidnappings and hostage beheadings in Iraq, has been killed in a U.S. air raid north of Baghdad, Iraq's prime minister said Thursday.

The Jordanian-born militant, who was believed to have personally beheaded at least two American hostages, became Iraq's most wanted militant, as notorious as Osama bin Laden, to whom he swore allegiance in 2004. The United States had put a $25 million bounty on al-Zarqawi, the same as bin Laden.

[I believe that's an AP photo]