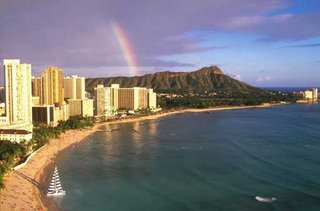 Just can't avoid this post. Its gonna be all over the internets soon.

Do you want to go to Spain? How about Paris or Hawaii? Think General Atomics [?] or Boeing might be willing to foot the bill? They might if you have political clout.

Over 5 1/2 years, Republican and Democratic lawmakers accepted nearly $50 million in trips, often to resorts and exclusive locales, from corporations and groups seeking legislative favors, according to the most comprehensive study to date on the subject of congressional travel.

"While some of these trips might qualify as legitimate fact-finding missions," the study said, "the purpose of others is less clear." In addition, the lawmakers' financial reports that disclose the details of the trips are routinely riddled with mistakes and omissions.

House Speaker J. Dennis Hastert (R-Ill.) proposed banning such travel [too his credit] soon after Abramoff's plea. But lawmakers of both parties and in both chambers of Congress quickly resisted imposing significant new restrictions on the trips, which are a much-prized perk of office. Rep. John A. Boehner (R-Ohio) won election to the post of House majority leader this year by running on a platform that included opposing the travel ban.

These people take trips you might only dream about and they're FREE! Best government money can buy I guess.