Congress Is Growing Balls?
Posted by SPIIDERWEB™ | 10:04 AM 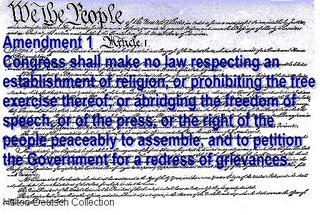 Its long overdue, but Congress is finally waking up to Bush.

In a new jab at the Bush administration over its use of executive power, the Senate Judiciary Committee is demanding that the Justice Department explain the agency's investigations of journalists who publish classified information.

Specifically, Republicans and Democrats want to know more about the FBI's effort to obtain a half-century's worth of papers kept by columnist Jack Anderson - a member of President Nixon's ``enemies list'' - who died in December at 83.

Matthew Friedrich, the Justice Department's criminal division chief of staff, is facing a skeptical panel at a hearing Tuesday.

Chairman Arlen Specter, R-Pa., has chafed for months over President Bush's secretive domestic wiretapping and phonetapping programs, and maintained that national security may not justify such uses of executive power. He personally told President Bush earlier this year that ``the president doesn't have a blank check.''

Let's look at the first amendment to the Bill of Rights of the Consitution.

Congress shall make no law ... abridging the freedom ... of the press...

The founding fathers were pretty clear about that.