Brilliant Recent Posts
Around the Blogroll and Elsewhere
That sound you hear is John Derbyshire screaming
This is your brain on cats.
Top Ten Inaccuracies in Bill O'Reilly's Book About...
Note to Michigan Voters:
Quote of the Day: Still the Best edition
Oops.
Every Dollar for Herman Cain is a Dollar for Misog...
Because sometimes your brain needs something to cl...
What a messed up culture we have


Just who's being violent here?
Posted by Jill | 5:31 AM
Updates from the dead-of-night raid on Zucotti Park:


Riot gear? Really? You know what they say about riot gear: 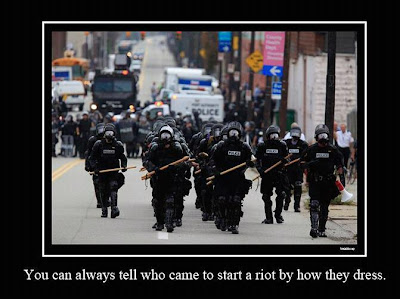 Do Mike Bloomberg and the others who think Americans should just sit down and take the reaming the banks are giving them really think this is going to go away, just because they clear out Zucotti Park and other Occupy sites? Do they really think this genie can be put back into the bottle?

The encampment at Zucotti Park was attempting to make a civilized mini-city, and it was largely working, until the right decided to send the James O'Keefes in their midst to come in and stir things up. Yes, there were bad apples, just as there are in any city....or even any Bible-thumping rural area. But when you consider how Occupy started out, what it created was an astonishing display of people power.

This is not the first time that the REAL jackbooted thugs (not the liberal ones that exist only in right-wing fantasies) have decided to squelch protest. From the hoses turned on people during the civil rights era in the south to National Guard troops gunning down college students in 1971, the bulldog guardians of entrenched power and greed always shut their minds down and do their masters' bidding. But in the end, Lyndon Johnson signed the Civil Rights Act of 1964, and Richard Nixon had to, and did, end the war in Vietnam. Unfortunately, movements take time to build and even more time to succeed. Instant communication via YouTube and Twitter has allowed this one to build in a fraction of the time those other movements required. Success will take longer, but with the right minds at work, and the slow awakening of the sleeping beast that has been the American people over the last decade, it can still happen -- with or without Zucotti Park.

Grung_e_Gene said...
Oh ye of the Thin Blue Line, the sad part is they need you now to crush the poor and impoverish the middle class but as soon as they do not Officer, you'll be fired just like the rest.
11/15/11, 9:40 AM

Ahab said...
This whole incident has my stomach in knots. I hope the OWS protesters rise from the ashes and continue their demonstrations.
11/15/11, 3:42 PM
Post a Comment
<< Home
Contact
Home
Email:
brilliantatbreakfast at gmail dot com
RSS