Brilliant Recent Posts
This is your nation under corporatism
Monday morning blues
Bin Laden Was a Liberal
Now this is just mean.
If you've had a suspicion that the right wants to ...
Comment rules
Blogrolling In Our Time
I think we're going to need a bigger boat
A post that will interest only about ten people in...
And now we return you to our regularly scheduled p... 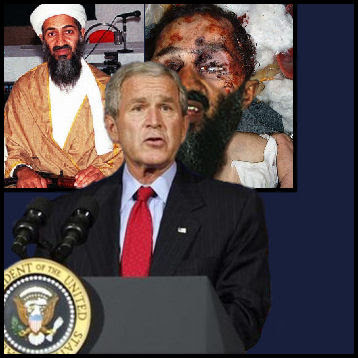 In the excitement over the news that Navy SEALs and the CIA killed Osama bin Laden, many inaccuracies were unfortunately reported as fact. The most disingenuous claim seemed to be whether the terrorist mastermind was armed in the final moments of his life. Yet, there were other claims that had been made that weren't reported as widely. What were they?

10) Among the treasure trove of intelligence gathered by Navy SEALs was a kick-ass recipe from Bill O'Reilly for falafel sticks.

9) Moments before his death, bin Laden was about to beat his own high score on CALL TO DUTY 4.

8) That bin Laden pushed his wife to a SEAL operator, screaming, "Take my wife, please!"

7) There was a Post-It note on the refrigerator that read, "Don't worry about Obama. He's a one-termer and he'll never find you. Let's do lunch. Pervez."

5) The last entry in bin Laden's secret diary read, "Will let it be leaked out to the CIA that I'm still living in a cave receiving dialysis three times a week. Always good for a laugh."

4) Was wearing a cock ring and holding a goat tether, screaming, "This isn't Florida! I can do whatever I want!"

3) The CIA tracked him down only because he got an iPhone last Ramadan.

2) Last text message to al Zawahiri read, "Black choppers in back yard. Must I tell CIA again I will not come out of retirement?"

1) That George W. Bush should claim even an iota of credit whatsoever for this after slithering out of office nearly 2 1/2 years ago.
2 comments