Brilliant Recent Posts
I sure hope he's right
Marge Gunderson from Hell
What's all this about national security?
What on earth is going on at the Associated Press?
No, I'm not watching
I'm starting to feel sorry for Levi Johnston
Troubling Statistics
Meanwhile, back at Camp Sanity...
And this years Insane Leap of Logic Award goes to....
Debunking Joe Lieberman 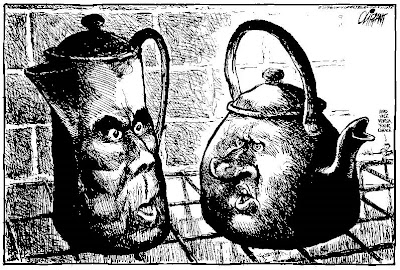 You can't deny that John McCain picked a broad that doesn't have a brass set. Let's take a look at Sarah Palin's latest swipe at Barack Obama.

Palin's puling, pissing and moaning about "the Obama/Biden Democrats" spreading lies about her and her family. She's taking Obama to task for voting "present" way back when he was an Illinois state senator, a voting and attendance record that somehow doesn't seem nearly as relevant as John McCain's own voting record of late that shows he hasn't cast a vote since last April.

This is coming, of course, from a typical Republican who's even now crawling away from the putrifying political corpses of Ted Stevens and Don Young now that they're circling the shitter. Palin is touting her opposition to Don Young's two bridges to nowhere but in reality she was for it back in in 2006. In fact, Ms. "Thanks But No Thanks" wrote in a questionnaire, "Yes. I would like to see Alaska's infrastructure projects built sooner rather than later. The window is now -- while our congressional delegation is in a strong position to assist."

And while we're on the subject of earmarks, Palin once said, "Earmarks are not bad in themselves. In fact, they represent a legitimate exercise of Congress’ constitutional power to amend the budget proposed by the president."

Indeed. When one hears such flipflopping from Palin, one can at last understand what John McCain meant when he called her his "soulmate."

It's no coincidence that Palin's speech was wetting the delegates' seats with her pious stance against lobbyists, the same delegates who defended to the death convicted scumbags like Jack Abramoff, who grew sleek and bloated due to the largess of fellow scumbags who enabled them these past eight years.

The only glimmer of honesty that we got from Palin last night was when she took a swipe at Barack Obama for daring to be a community organizer back when, once again, he was an Illinois state senator. Apparently, you're not supposed to be instrumental in keeping heat in the homes of the poor, keeping the poor in their homes, keeping food in their stomachs or otherwise helping them when they're fatally failed by the very same principles that sociopaths like George W. Bush, Dick Cheney, John McCain and other Republicans champion. Whatever issues I have with Obama's continued moral cowardice and his own flip-flopping of late, back in the day when he was a community organizer, Obama represented the very best that America had to offer: Compassionate liberalism.

But in Crazy Base World that's bleeding heart liberalism. Which is, I guess, supposed to pass for a populist message among the psychological sideshow of the Republican delegation. However, I can think of ten million reasons why Palin should keep talking.

If you thought the 1992 Republican convention was mean-spirited, just wait until McCain accepts the nomination in his "town hall" setting (It's just a coincidence that this particular town is 100% Republican). The white streaks you'll see darting across your TV screen will be Republican ejaculate squirted by those who will do their damnedest to perpetuate the last eight years that they simultaneously think they're repudiating.
4 comments

Anonymous said...
In the general campaign it is Joe Biden's job to deal with Palin, with some help from Hillary to remind folks that Hillary has a 30 year record as one of best child & family advocates in America & is in a position of real national power in the senate. Obama has to run against McCain, & Palin is not the main focus. She was not the main focus last week & she can't be next week. McCain desperately needs to separate himself from Bush, & we have to prevent that.
9/4/08, 8:19 PM

"Within the first few minutes of palin's speech my phone started to light up with text messages. I could instantly tell that my liberal friends (and there are many) were nervous. palin the future president and next vice-president of the United States had something to say. the messages started with simple admissions like "she's doing well." As the humored filled speech unfolded my text messages increased. "she's doing well" became "wow." The evening ended with scared muses and hostile phrases like "we still have 2 more months" and "but how many hockey moms could there actually be in america." the liberals were scared."

Nobody -- nobody here at least -- ever said that Karl Rove's SPEECHWRITERS can't generate excellent rhetoric. Indeed, they are among the best around!

And Palin's previous talents as a TV sportscaster -- reading scripted stories from a teleprompter with some enthusiasm -- is obviously being put to good use.

I want to see her in an UNscripted setting where she actually needs to KNOW the answers to the pressing questions of the day [like how big -- exactly -- is a TRILLION dollars; what -- exactly -- "executive experience" does the mayor of a town smaller than many high schools have].

So I'm not surprised she "did well" in her inaugural speech that someone else wrote for her. What really scares me is that most people will never see any other part of her.. And that's certainly true as long as KR & Co keep her from spontaneous appearances. [Consider what happens when Biden goes "off script". Maybe scripted is better! And if you know anything about TV news shows, you know that there is a catagory called "scripted banter".]

McCain may well have chosen the best possible VP! At least from his perspective.
9/5/08, 8:13 AM
Post a Comment
<< Home
Contact
Home
Email:
brilliantatbreakfast at gmail dot com
RSS