Brilliant Recent Posts
Friday Big Blue Smurf Blogging: What They Said
Whatsa matter, John, Dunkin' Donuts coffee ain't g...
Seder v. Maron; Friday 8-22-08, 3 PM EST, LIVE! B...
First Andrew Sullivan, now David Brooks? What is t...
So how dumb...and how vindictive...are women voter...
So what do we have to do to get Harry Reid to quit...
How John McCain Bought the Press for the Price of ...
Boy, talk about not wanting to be part of any club...
George Orwell rolls in his grave
Thank you, Senator Biden


Friday Cat Blogging: Special Maron v. Seder edition
Posted by Jill | 5:40 PM
The prodigal son is returning, and there was much joy and celebration throughout the land.

Ever since December 2005, and especially since the middle of 2006, those of us who have been carrying the torch for the late and lamented Morning Sedition have been waiting with bated breath for any news whatsoever that perhaps the suits at Air America Radio might have realized the colossal mistake that occurred 4,287 management changes ago (or so it seems), when Danny Goldberg decided that because he didn't like Marc Maron, one of the most popular shows on the network should be cancelled. Since then, the faithful Maronisti have been congregating over at PJ's place, skulking around comedy clubs hither and yon, and sitting through choppy VODcasts at Sam Seder's site, while our Two Jewish Heroes got screwed over by AAR again and again.

Perhaps it's because right now Air America is but a fading shadow, with only lowlights like Lionel and the earnest but dull Ron Kuby as marquee properties, now that Rachel Maddow is hitting the big time, and who knows how long she'll be able to handle a three-hour radio show (even a pre-recorded one) and a nightly network prime-time show of her own. Or perhaps it's the realization that Maddow is the last personality left on Air America with a following. But whatever the reason, the Powers that Be have decided to swallow their pride and Do What's Necessary to bring Marc Maron back to New York where he belongs.

And so, today, we learned that on Monday, August 25, at 3:00 PM Eastern Time, Messrs. Maron and Seder will be bringing their own unique brand of bickering, ferociously smart, often hilariously funny, "Hey Kids, Let's Put On a Show" video back to Air America (sort of). The VODcast will be shown at AirAmerica.com. There will be sketches, man-on-the-street interviews, political commentary and interviews, large doses of Teh Funny, and even Brendan McDonald from the old Morning Sedition board crew is back to produce the show. Maron is coming back to Astoria, with two of the Original Astoria Cats (my money's on Moxie and Monkey), returning to Where It All Began.

The show will run daily at 3 PM Eastern Time starting Monday, and will continue at least through the election. There are enough Maron and Seder fans out here that Sam's site was getting royally clobbered during today's VODcast, where the new endeavor was announced, so I have no doubt that with precious little marquee talent still in the stable, and two guys with some of the most loyal fans in radio, that this little venture into the future of broadcasting is going to succeed.

Presumably the show will be available as Video On Demand, so you'll be able to watch it any time; more on that is it develops. As this year's presidential campaign gets sillier and more trivial than ever, you'll want to have ready access in order to keep your sanity. 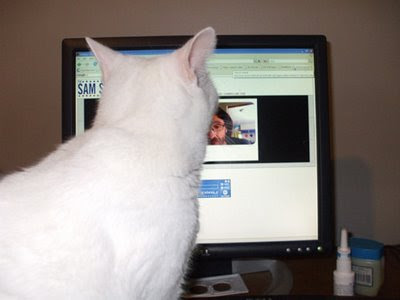 ...and wanted to IM Sam until I told her we don't have IM: 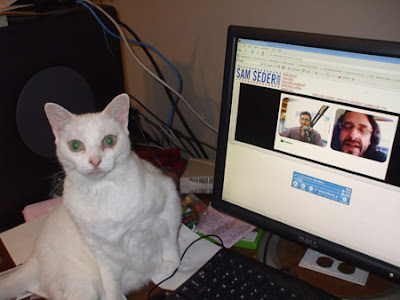 ...and thought that the talk about the PUMA crazies was about cats: